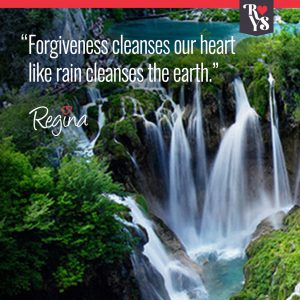 As a spiritual teacher and author I regularly discuss topics we would prefer not to talk about. There are so many things we face in life that are painful, so our tendency is to run from them, try to ignore them, or sweep them under the rug, so to speak. But in my experience the hard, hurtful experiences we so want to avoid don’t just magically go away. We have to intentionally let them go by bravely talking about the hard to talk about.

Like how to forgive sexual abuse. I was eleven when a sixteen-year-old male babysitter sexually molested me. I was eighteen when a physician casually ordered his nurse to leave the room so he would be free to sexually molest me in private. I am far from alone. I am not proud to tell you the majority of women I know have either been sexually abused or know of people, women or men, who have been.

One of my women friends was sexually abused by her father between the ages of eight and eleven. Her mother knew about it and did nothing to stop it, because she was financially dependent on her husband and had been threatened to stay silent or lose the means to live.

Since her mother was frightened into being an unwilling accomplice to the sexual assault, my friend suffered the long-term effects of abandonment by both her parents. She struggled for years to cope with her horrible past. A history which, as a child, she had no power to prevent or change.

Because my friend was physically, emotionally, and psychologically abused as a child, she allowed herself to be mistreated in her adult years, either by other people or by hurting herself.  She developed posttraumatic stress disorder, an unhealthy relationship with food, was repeatedly admitted to psychiatric hospitals, and lived in fear and self-doubt.

And today she is enjoying a peaceful life because she chose to heal.

But how did she do it?

She chose to forgive.

Forgiving those who harmed her so horribly does not mean my friend accepted the negative treatment she endured as okay. She realized she did not deserve to be abused. She came to realize that forgiving means releasing the resentment she held because she believed her parents should have done better than they did. They did not, so she chose to do better in order to free herself of the resentment that was destroying her life.

Although memories of the abuse continue (we don’t forgive and magically forget) to surface she is no longer haunted by them. One of the reasons for her dramatic transformation is, my friend intentionally chose to move herself out of a victim mentality. It took effort and much self-love since for many years she ignored her negative behavior and how she allowed herself to be treated. She felt deserving of bad treatment because she was treated so terribly in the past.

One day she realized hurting herself or allowing pent up anger and self-loathing to abuse other people would never get back at the people who hurt her in the first place. Therefore, to heal, she chose to move on from her past by dropping the identification and behavior of being a “victim.”

Although not a religious person, she came to accept and depend on the powerful, kind, and forgiving force (soul) within her to provide the strength and willpower necessary to leave the abuse of her past in the past. She intentionally worked to master her mind with a mind of its own by learning to evaluate each of the negative memories from the perspective of being a witness rather than a victim.  And she taught herself to remain aware of her thoughts, to evaluate each, to determine if they are valuable, loving, kind, and self-supportive.

One of her most powerful realizations was understanding that if her parents could have done better they would have. If her mother and father had been in touch with their emotions they would have had empathy for her and would never have subjected her to abuse.  She came to know love does not abuse, use, or mistreat – ever.  My friend realized people who are hurting, hurt others, just as she had done.  She came to be aware of the truth, people who heal the pain of their abuse also choose not to pass their wounding onto others.  Out of self-love and respect they stop the cycle of abuse and refuse to hurt themselves and others.

These revelations gave her the power to forgive her father for the abuse and her mother for not protecting her.  Acknowledging she was powerless to prevent what happened to her, she also forgave herself for the misguided and self-destructive idea she should have or could have done something to avoid the cruelty. Realizing she could not have prevented the unpreventable or now change the unchangeable, she was able to release resentment over her powerlessness. Forgiveness allowed her to free herself of bitterness, anger, fear, and desire for revenge.

Forgiving allowed me to be free too.

Certainly my friend and I did not heal overnight. It took years of thoughtful and caring effort. However, when we realized people only do better when they emotionally know better, we began releasing resentment over our past. It was letting go of the bitterness we carried about how her parents, my babysitter, and the physician should not have done what they did that allowed us to speed up the healing process.

Regardless what happened to you, whether it was in the past or today, releasing resentment and what you think should or could have been is a key needed to unlock the door to your freedom. Freeing yourself of animosity is accepting the reality that once an action is done it cannot be undone.  No matter how much you may want someone to take back or own up to the harm they caused, they cannot change the past. Just as you cannot take back anything you have done to hurt yourself or others.

Suffering over the past does not allow you to live today. Planning to be free of anger and resentment someday prevents you from creating joy and fulfillment today. Now, today, is the only time to release the past, to have the best present, so you create a fulfilling future.

I promise, through my own healing experience and by working with abused people throughout the world, if you choose to respond to challenges by releasing anger over what happened to you in life, the need for revenge and restitution vanishes. Discharging resentment over what cannot be changed is a powerful action of self-love. Letting go of bitterness helps heal your emotional wounds so you do not take your pain out on those you say you love or on the strangers you meet each day. Releasing anger over what cannot be changed is truly the only way to take back your power from those who abused, judged, or ridiculed you.

For your physical, mental, emotional, and spiritual well-being, and because you care for yourself, choose to let go of what you cannot control or change. Set healthy boundaries today. Do not allow yourself to be abused. You will not forget but you can cut the ties that bind you to your abuser. Start by thinking of forgiveness like rain. It cleanses and nourishes the earth. Forgiveness (letting go of resentment over what cannot be changed) will cleans and nourish your heart.

We Are Spiritual Beings