Look Outside the Box 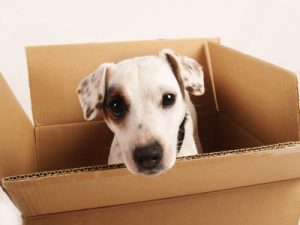 “Hey Giorgio, the peanut butter box is here,” says Ralph, a huge St. Bernard who is looking out the window when he excitedly calls for his little Chihuahua buddy to hurry over. They live together in a home with a large picture window that gives them a view of their owner’s porch and front yard.

Tiny Giorgio jumps up onto the stool by the window and looks out. He sees that a box has been delivered from Chewy.com.

If you live within delivery range of the online pet store Chewy.com, you may have seen their very popular commercial, “The Peanut Butter Box Is Here.” It rivals the touching Clydesdales ads during the Super Bowl. It’s one of my favorite commercials ever. So clever and cute, and the title — “The Peanut Butter Box Is Here” — is a phrase I catch myself singing to my dog Ruby when I coat her medications in peanut butter.

Go ahead and admit it, pet parents, you sing it too.

It’s such a warm and fuzzy (pun intended) commercial. And, in addition to being clever and cute, I find the exchange between Ralph and Giorgio a lesson in how we often only see what we want to see and don’t consider there may be a bigger picture to what we see. Like big Ralph’s focus on the “peanut butter box,” while Giorgio sees the box but goes beyond to acknowledge the flea and tick medications that are inside.

How often do you and I focus on only one aspect of what is in reality a much bigger picture?

For example, we see someone (partner, politician, preacher, etc.) as who we want them to be rather than who their behavior tells us they really are.

A friend of mine has an unmarried adult daughter who became pregnant. My friend felt no stigma around her daughter’s pregnancy; however, she had a problem with her daughter’s boyfriend, who psychologically tormented, manipulated, and was disrespectful to her daughter. She also had difficulty with his mother, who defended her son’s abuse.

The daughter also excused the boyfriend, saying she loved him. She refused to listen to her mother or sister, both of whom asked her to see the man for what his repeated behavior revealed was the truth of his character. Their words fell on deaf ears, because her infatuation with her boyfriend was blind. She did not want to see beyond the box of her infatuation.

But doesn’t infatuation see what it wants to see? Limiting our overall view?

With every fight, the daughter complained about how badly her boyfriend treated her. Each time, her mother and sister reasserted she had to end the relationship. The young woman repeatedly refused to let the man go. But my friend looked beyond her daughter’s infatuation.

She knew the young man’s abusive treatment of her daughter was not love. In this case, my friend exercised a tough-love option. Since her daughter lived with her, she asked her daughter to leave her home. My friend knows love is always positive, even when it seems to act in the opposite way to stop enabling negative behavior. She knew as long as she allowed her daughter to stay, the young woman had a place to return after each mistreatment and argument.

When this option was removed, her daughter was faced with a choice. Either continue to take and excuse the man’s abuse (see what she wanted to see) or begin to care for herself and admit she was being treated unacceptably. This was a choice only she could make. No matter how much my friend loves (cares for) her, even as her mother, she was still powerless to change the behavior, perception, or self-esteem of her daughter.

After living with her boyfriend, my friend’s daughter had a change of heart. She finally saw beyond the box of her infatuation to admit how she allowed herself to be mistreated by her boyfriend and his mother.

Over the course of life, I’ve learned the boxes we create about people, situations, and belief are bigger than we often allow ourselves to admit. Take the idea of what God is.

We are told what God is, but the truth is, we really don’t know. We see what we have been told to see, often without opening the box of belief to expand our understanding. Yet, if we were to take a drinking straw and look up into the night sky through it, we would see about 10,000 stars within the tiny circumference. Multiply the objects in that small space by the entire night sky and the number of stars, planets, and universes is beyond comprehension.

How can God be put into a specific box of gender, form, religion, or set of beliefs?

Wouldn’t an out-of-the-box, expansive view of God be the universal acceptance necessary for us to stop fighting one another over God, our differences, and religion?

I believe so. Likewise, imagine the kinder world we will create when we expand our view of other people beyond the tiny box of a preconceived idea.

One time my uncle’s car broke down on a sparsely populated stretch of two-lane highway. This happened long before cell phones, and he was stuck in the middle of nowhere. He had to depend on the off chance that someone would come along.

Most of the motorcyclists waved as they passed by my uncle. Two riders stopped and politely asked if they could be of help. They discovered the problem and repaired it, and soon my uncle was back on the road with a new perspective on people who ride motorcycles.

From partners, to God, to stereotypes, every day in many ways, we are presented with opportunities to get outside the box of limiting belief and expand our perspective.

It’s something that Giorgio and Ralph remind me to do. And of course, they also remind me to smile and take pleasure in the little things. Like how delicious I also find peanut butter to be.

It's Time to Unfold Our Angel Wings

The Power of Teamwork