Find a Need and Fill It 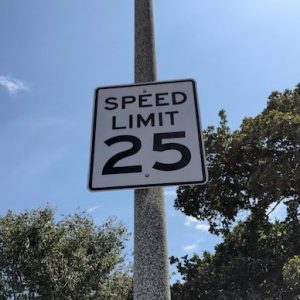 I know this is just a 25 mile per hour speed limit sign.  And it is my sign, because I am the reason my street has this sign.  That makes me very happy and proud. Let me explain.

I live in Los Angeles, California, the second largest city in the United States.  It is a huge place with thousands of busy streets filled with millions of cars.

My neighborhood in LA is located between two very busy streets – Wilshire and Olympic Boulevards.

Every day hundreds of cars (yes hundreds) use our street as a cut-through from Wilshire to Olympic and from Olympic to Wilshire. The traffic is non-stop from early morning until early evening. People rushing to and from work use our street to avoid traffic signals at major intersections. And for whatever reason, many of the people in those cars speed up and down our street, sometimes dangerously fast.

For many months my neighbors and I have felt powerless to do anything to help keep our street safe. Some of my neighbors scream at passing cars. I want you to know that does not work. But I certainly understand as we’ve all felt frustrated.

So one day in late April this year, I took action. I wrote a letter and got 29 of my neighbors to sign it. We sent our official request to the traffic manager of our community asking for speed limit signs and speed bumps.

He is a very kind man but after a lengthy conversation we were informed that city codes prevent us from having speed bumps on our street. But he said we could have speed limit signs installed at each end of the street. Which caused me to wonder why the signs were not already there. (?)

Of course this was not everything we wanted but it was what we could get. And we would not have gotten the signs had we not alerted the city official with the power to do something.

While these two signs may not stop everyone from speeding up and down our narrow street, maybe they will help remind visitors they are in a neighborhood with young families, children, pets, and older people.

Getting the signs is a small example of what can happen when people work together to be the positive change we want to see. If these signs get some people to slow down, and that reduction in speed prevents accidents, we’ve made a positive difference.

You and I cannot change the whole world but we can look to our part of the world for ways to help make our neighborhoods safer, cleaner, kinder, and more respectful.

I encourage you to be the positive change you want to see.  Find a need and help get that need filled. It sure feels good to do so.

Care About The Wake We Leave