True Power is Owing Your Behavior 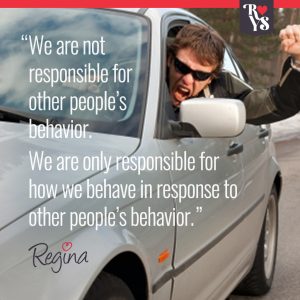 While out and about in the neighborhood with my dog Madison, a corgi-sheltie rescue, I noticed a group of young men walking toward me. They were talking loudly and pushing each other around. Shoulder to shoulder, they moved in a tight, five-abreast formation that spanned the entire width of the sidewalk, leaving no room for anyone who may have been approaching from the opposite direction.

With a cup of hot coffee in one hand and Madison’s leash in the other, I continued walking. As we steadily moved toward each other, I realized there was nothing for me to do except stop. The group, seemingly unaware of my presence, did not break rank. At the last possible second, a young man bumped into me, and my dog and I were forced off the sidewalk and into the street. The group did not stop. The young men did not look back as they went on their way. I silently collected myself, my dog, and what was left of my coffee.

In the past, chances are good I would have impulsively reacted to the young men, pointing out their inconsiderate behavior with something profound, such as, “Hey, assholes! Didn’t you see me? You are rude, selfish little jerks.” This time I did not. Today, I own my behavior.

Positive change requires challenging ourselves. The next time you encounter a rude driver, thoughtless teenager, or an arrogant co-worker and you behave in a way that leaves you disappointed in yourself, be completely honest and assume accountability for your part of the exchange. Being able to admit we are wrong is the action that gets us on the right track. Holding ourselves accountable empowers us to make different, more positive choices next time.

Stay True to Yourself While in Relationship with Others

Know What You Value to Know Who You Are