The Broken Circle by Karen Winnick 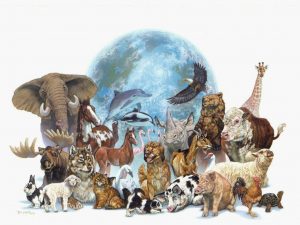 We don’t own the earth. We need to share it–

Birds need trees to perch and build their nests. Trees need birds to eat their fruit and spread their seeds to plant new trees.

Nature is a fine-tuned circle. Breaking the circle disrupts the natural order. When we don’t see, don’t understand or care, we cause great damage, as when we nearly wipe a species off the face of the earth—

Once, in Yellowstone Park, gray wolves made the circle whole.

They lived with elk, beavers and bears. They also shared the park with foxes, coyotes and many kinds of fish and birds.

The wolves formed packs, and each pack marked their territory with a chorus of howls.

In summer, the wolves romped over grassy meadows. In winter, they plowed through deep snow.

In spring, the alpha female in each pack dug a den and gave birth to pups. All the wolves in the pack helped to raise the pups.

Together the pack chased elk, most often going after the weakest in the herd. They shared their kill and brought back meat to feed the pups.

Contented, the wolves snoozed in the sun while a fox or coyote snuck up to snatch leftovers. Eagles and ravens swooped down to grab scraps, too.

Nature was in balance in Yellowstone. The circle was whole.

Then, fear and mistrust of the wolves began to grow. People called them a threat. Some wolves wandered outside the park. They killed ranchers’ sheep and cattle.

No more wolves were left in the park.

Because there were no more wolves, elk herds grew bigger. More and more elk ventured into the park’s forest to graze in groves of quaking aspen. They grazed until the quaking aspen disappeared.

Few birds flew into the park. There were no branches on which to perch and sing their songs. There was no place to build their nests and hatch their young.

Few fish swam in the river. There were no shadows in which to hide, no shade to keep the water cool.

Few beavers splashed in the creeks. There was no wood to gnaw. There were no dams built to slow the water that ran too fast in the creeks. Without the dams, no ponds were formed for fish to spawn or waterfowl to float.

Grizzly bears could no longer fill their bellies with huckleberries before their winter sleep.

Many years went by in the park. Years with scarce huckleberry bushes and hungry bears.

Years without drooping willows or splashing beavers, without cottonwoods or swimming fish, without quaking aspen or singing birds.

Because the herds grew so big, the elk went hungry. Many became sickly and starved.

Some people began to understand, nature was no longer in balance in Yellowstone. The circle was badly broken.

More years passed and then, a few gray wolves drifted down from the north. They settled in the park.

Other wolves were brought in by people who hoped to restore the balance.

In spring, the alpha female in each pack gave birth to pups.

The wolves chased elk and brought back meat to feed the pups.

While they snoozed, a fox or coyote snuck up to snatch leftovers. Eagles and ravens swooped down to grab scraps, too.

Because the wolves came back, elk herds grew smaller.

Birds sang their songs and raised their young.

Cottonwoods sprung up by the river.

Fish swam in the cool water and hid in the shade.

Drooping willows appeared near the creeks.

Beavers splashed and built their dams.

Ponds formed where fish could spawn and waterfowl float.

Bears gobbled them before their winter sleep.

Gray wolves were back in Yellowstone. They made the circle whole. 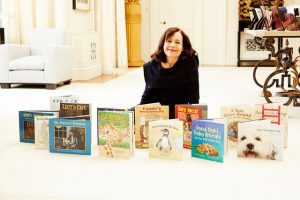 What if All Children Are Accepted for Who They Are

How I Deal with Grief, And Especially During the Holidays by Lisa Harrison