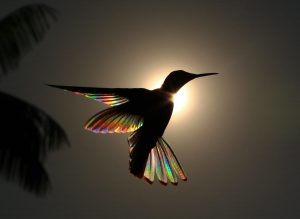 This beautiful photo by Christian Spencer reminds me of the day when a gentle thud caught my attention. This sound was curiously familiar.  As a bird lover, I know immediately when one has been temporarily blinded by the sun’s reflection, causing it to crash heavily into one of the many windows in my home. I rated this sound similar, yet lighter, reminiscent of one human finger placing a single sharp rap on a pane of glass.

I hurried to the kitchen window that wrapped itself around the right back corner of my house, offering a magnificent view of the tree-filled backyard. Scanning the bushes and grass close to the house, I saw nothing out of the ordinary. I rushed down the steps and reached the bottom just as one of my dogs, Charlie, who had been roused from a nap by the sound, arrived there. We headed in the same direction, stopping at the hydrangea bushes lining the flower bed beneath the window. There, on a single leaf, lay a hummingbird. I scooped up the tiny bird before Charlie could get the notion to do it himself, and headed back up the stairs into the safety of the house. Charlie remained for some time, sniffing for the source of the odd smell that lingered in the air.

Once inside, I opened my hand. Cradled there was one of the most spectacular beauties of Mother Nature, tiny and still. The bird’s eyes were shut. It was stunned by the impact, but it was still alive. I saw it breathing, and with one finger pressed lightly against its chest, I felt the rapid beating of its heart.

Braving the likelihood of having to refuse another invitation to tour my aging neighbor’s beer bottle collection, I ran next door to get witnesses to this event. On the doorbell’s second ring, Marie, the old man’s wife, slowly opened the door. Through the screen, she motioned for me to come inside.

“Thanks, Marie, but no. I want you to come outside to see what I have in my hands.”

“Robert, come here and see what Regina’s got,” Marie hollered back over her shoulder into the cavernous hallways of the house.

Soon Robert appeared, smiling from ear to ear, ready with his invitation for the tour. But Marie spoke up before he could.

“Look,” she said, pointing to the little mass of metallic green feathers.

“Well, would you look at that,” Robert replied. Surprise spread over his face as he saw the tiny bird. He had probably come to greet me with thoughts of familiar things – a tour, the weather, how high the grass was growing and when he’d get around to cutting it. What he found as he opened the screen door to join us on the porch was most likely not in the realm of his imagination. I watched his face as he stepped out into the beautiful spring day. Wrinkles he had borne like badges of honor for all he’d seen during his 85 years of life seemed to smooth out in awe of what he now witnessed.

I told them the story and answered their questions as best I could. When they were satisfied, we all fell silent—a new occurrence in the six years we had known each other.

The bird remained still, its eyes closed as both Marie and Robert took turns gently and lovingly stroking its tiny body. Touching the bird allowed each of us to know for sure what we were experiencing was real. It was so soft and downy, small and helpless, yet its powerful heartbeat was proof of its tenacity to survive.

After a few more minutes, I told my neighbors goodbye. I felt such a love connection with them for sharing the experience with me. But now, something called me to be alone with the little bird. I returned to my front porch and got comfortable in one of the chairs.

I was reluctant to leave it alone, fearing it would perish to a wandering cat. It was beautiful, small, vulnerable—and yet displayed a magnificently strong design in such a petite package. I was torn between wanting to keep it and praying for its full recovery.

It was a male Ruby-throated, the widest ranging of all North American hummingbirds. I remember as a child growing up in South Texas, they were constant visitors throughout the spring and fall. The tiny bird was common in Central Alabama, too. I often watched three or four competing at my feeder. Almost invisible, they dove, and darted, and dive-bombed, and somehow miraculously avoided colliding with each other. Cheeping and clicking, they delivered strong protests to others who tried to compete for a spot to rest or feed. I thought them civilized representatives of a natural world with often cruel and uncaring aspects. They are two-inch-long powerhouses of fierce independence. Hummingbirds are always ready to courageously defend their territory, but in a way in which the birds never seem to get hurt. I thought how wonderful it would be if humans, too, could find ways to settle differences without hurting one another.

Sitting on the porch holding the bird, I was content. Rescuing birds, squirrels, mice, and other creatures from nature’s harsh realities is one of the things I do. It’s a common occurrence for me to make a box for a family of robins upended from their nest by a thunderstorm, or find a new home for the mice I might discover while spring cleaning. This, however, seemed a different and more enlightening connection to the natural world.

I had witnessed hummingbirds so many times but never had been this close. Their wings beat so fast they often seemed more fantasy than real. A blur of color flitting from here to there so quickly my eyes could not follow. Nevertheless, here one was, real and still in the palm of my hand. I was able to see up close how its little clawed feet curled slightly and to study the perfectly uniform feathers that covered its small body. The vibrant, iridescent colors of its wings and throat were truly amazing.

We sat together for several more minutes. With each moment, I wondered if it was going to make it. Tenderly I stroked its chest, watched, and waited.

Suddenly it woke up. Flipping up from its side, it sprang to life. It hesitated for a split-second, seeming to gather its bearings. Then it was off, propelled rapidly upward by its awakening. As it cleared the porch, it made a half-circle and returned to where I was sitting. It hovered in front of me, about two feet from my chair, and remained for what seemed a full minute. Never taking its eyes off me, it stayed back, yet was close enough that I could feel a slight breeze from the rapid beating of its wings. As it looked at me, I thought surely it was saying thanks for plucking it off the leaf and keeping it safe for the past half-hour.

I will never know exactly what the little bird was thinking as it made one final circle above my head and flew away. Later I found some tiny feathers on the porch that must have fallen from its wing or tail. They weren’t green like its body, or red like its throat, but white and black and gray. Today I still have those feathers in a very special bowl.

Holding the hummingbird was a miracle. It was an opportunity that taught me to appreciate the things I love, to cherish each moment, and to courageously get back up when life throws a punch. It was an awesome privilege to be given thirty unforgettable minutes when time stood still and I held the most exquisite creature in my hands, to feel its warmth, and to marvel at its magnificence. That little bird taught me to pay very close attention to life, because often the best gifts really do come in the smallest packages.

Who are we? What is our reason for Being?